Glass: gems between Nature and Art

In our modern world, we don’t think much of glass- we don’t often consider the material, and when we do, it’s rarely held in high esteem. There are, of course, many talented artisans creating amazing pieces of art in glass, but for most of us, glass is a container, to be emptied and then reused, recycled, or discarded. It’s a material so ubiquitous and easy to make that it is rarely actually recycled; in modern industry, it’s far cheaper to make it new.

In the ancient world glass was considered a high art, both in the form of objects such as plates, goblets, vases, and the like, and as a jewelry material in imitation of natural gems, but also as an equal companion to them. If we let go of modern gemstone propaganda, especially the false rarity of diamonds promoted by their cartels, we can let ourselves reconsider what is precious, and why.

Before modern tools and manufacturing, artisanal skill was more highly valued, and for millennia, it took great skill to create high-quality glass. Adding the right minerals to make it hard but not brittle, colourful but still translucent, workable and bright was seen as a form of Alchemy, and it is in magickal and alchemical writings that we see the earliest references to the mystical art of glassmaking, as far back as Mesopotamia and Egypt. In Phoenicia, this art was so highly prized that glassmakers were forbidden from traveling, lest their secrets be taken by a rival kingdom and end the Phoenician monopoly. 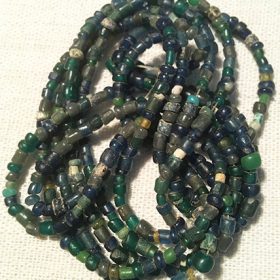 But long before the Phoenicians created their fine glass objects, back to ancient Egypt, the earliest known objects made of glass are beads, thought to have been created as a byproduct of faience making. Faience is an interesting material in its own right- a type of ceramic which, when fired, creates a glass-like glaze across its surface.

No one knows for sure how artisans made the leap from glass as a ceramic glaze to the making of all-glass objects, but by 4000 BCE, glass beads were being widely produced, and were considered a man-made precious stone, traded as far as northern Europe, as a Danish find of beads from King Tut’s glassmakers shows.

Glass beads were especially treasured in deep blue shades that mimic the natural stone, Lapis lazuli. This technique was originally developed earlier, in Mesopotamia, and glassmakers from there were either convinced or forced to give up their secrets to the Egyptians. In both ancient Mesopotamia and Egypt, Lapis was considered highly sacred, the “stone of heaven”, and even glass imitations of it were as valuable as gold.

In Mesopotamia, the natural Lapis stone was called uqnu sadi, or mountain Lapis, while Lapis-coloured glass was called uqnu kuri, or kiln Lapis. In Egypt, no such distinction was made, nor was a distinction made between magickal or amuletic jewelry and what we would call simple aesthetic adornment. And so, materials used in their arts would be named for their spiritual properties, with both natural Lapis and its blue glass twin being named joy; green Malachite stone and green glass would be named after Hathor, to whom they were sacred, and so on.

Those colours were created through the addition of other minerals to the basic silica, soda and lime formula. For Lapis blue, cobalt was used, and the addition of copper created green. All of these shades and more were used only in jewelry- unlike many other societies that used glass for objects such as cups, bottles, and tableware, the Egyptians reserved glass for adornment only, combined with all the other metals and materials they deemed most precious.

The other striking feature of Egyptian glass beads is that they tend to be monochromatic. They were able to make beads of many different shades, but they did not often combine multiple shades in one bead. Thus, Egypto-Roman glass typically shows beautiful tones of blue, green, and more, varying from bead to bead, but with no patterning or decoration on each bead. 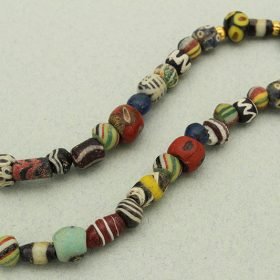 Moving forward in time and across the Mediterranean, the glass beads of ancient Rome were made with ornate, complex patterns of different colours of glass, layered and fused together in a multi-step process. One of our reference books lists 16 different pattern types, from simple waves and zigzags to spirals, swirls, and chevrons, as seen in this necklace.

It’s not known what each pattern represented, if they had any deeper meaning at all, with the exception of eye patterns, which are deeply significant in many ancient cultures.

Ancient Roman eye beads often have concentric circles in shades of blue, a pattern still seen in modern glass amulets from tourist markets, as well as painted on ships, buildings, and even cows. As with all eye patterns, natural or created, they represented unblinking, ever-vigilant watchfulness that would stare down malevolent influence at all times, as we discussed in this post.

Moving forward further in time, we can see the glassmaker’s art becoming its own, original expression rather than the imitation of nature’s gems and materials, especially in the Venetian and Islamic glass beads found along the trade routes that come together in Mali.

In these beads, we see amazing patterns, not just applied to the surface with strings of contrasting colours, as with earlier beads, but in layers, built up and folded in as the beads are created. Mosaic beads, where tiny chips of contrasting colours are layered on in geometric or figural patterns are one type of these beads. Checkerboards, stripes, and even images of people, animals and plants can be found in these colourful creations, each like a lively little world. 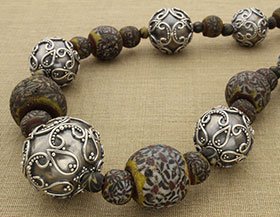 Related to the mosaics in technique and aesthetics are millefiori beads, in which the applied decoration takes the shape of flowers- millefiori meaning a thousand flowers, as seen in the Byzantine beads on this necklace.

This decorative technique starts with the making of canes of class, starting with a central colour that may also be pressed into a mold to create a pattern such as a star or scalloped circle. That central section is then dipped into molten glass of contrasting colours, layer by layer, much like dipping a wick into wax until it builds up to become a candle. Each layer may also be pressed into a mold to continue the patterning by shaping the outline of the glass itself.

After the layers are built up, the glassmaker has a ovoid lump of glass, layered in the desired pattern, but much larger than the final millefiori piece will be. So that lump is heated until flexible again, and stretched like taffy to the desired thickness of the flower being envisioned. Even though the lump starts out as big as a baseball, and is then stretched into a pencil-thin or smaller rod, the layers of patterning laid out in the original creation remain intact.

Once the rods are all stretched out to the thickness desired, the rods are sliced into sections that show the internal pattern, much like slicing a cucumber shows the inner pattern of its seeds. These slices can then be applied and fused to the outside of a glass bead, covering it in “a thousand flowers”. It’s an ingenious process that is fascinating to watch, as in this video from the Corning Museum of Glass.

We hope this brief tour of glassmaking techniques and the beautiful beads they create has been interesting! If you’d like to see some of these types of beads in beautiful, wearable art, check out our Alchemical Gems Collection!