Out of all the ancient magickal beads and amulets that I have collected over the years, I have always been fascinated with eye beads. Throughout history, people have always sought protection from the evil eye, the negative energy that comes when another gazes with ill intent.

The history of this protective bead goes back in ancient history as far as Paleolithic times up to some present day cultures, with many people today collecting and wearing these beads. In my research, I’ve found that the evil being warded off could come in many forms.

Eye stones could be used to protect the wearer from illness, or the malignant emotions of other people, or to protect the self and property from demons, spirits, or vengeful deities. Babies, in particular, were considered especially vulnerable to attack, and to this day, eye amulets which sit on the back of the baby’s neck are used for protection, perhaps to stare down the evil that might lean into the crib and harm the little one.

Each civilization had its own particular eye amulets, with unique qualities attributed to them and their power resting in the peoples’ faith in them and ritual wearing of them. Eye amulets can be made from many materials, including stone, glass, and bone, and not only were they worn as jewelry, but they could be incorporated into clothing, vehicles, and architecture. 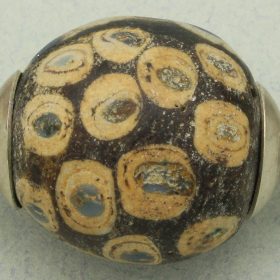 In Egypt the amulets of the eyes of Horus, carved of stone or cast in faience, were used as both protection and to bring good fortune. In Tibet, natural agates that formed concentric circles of colour like eyes were worn, and eventually imitated in the combination natural and treated patterns of Dzi beads.

In ancient Rome, glass beads with many “eyes” made up of concentric dots were popular, as seen in this bead, representing eyes that see in all directions and never blink.

In my work, I incorporate many eye beads and objects from different cultures, which nevertheless carry the same intention and energy to protect the wearer from harm, and I combine them with my magickal metal work to focus and magnify their protective power.